09/07/2010
VietNamNet Bridge – The European Commission has launched an international painting contest focusing on gender equality under the sponsorship of Belgium Princess Mathilde, for the third time. 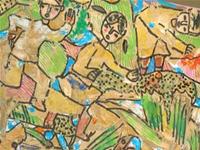 The contest is open to all children in the world to express their views about gender equality. The best two paintings in each region will receive Eur1,000 each.

A launching ceremony in was held o­n March 10 at Tran Cao Van Primary School in the central city of . The contest in is jointly organised by the EC Delegation to and the Children’s Newspaper.

Vietnamese children between the ages of 8-10 can send paintings to the organising board until April 30, 2009. The ten best paintings will be sent to to participate in the international contest.

Winning paintings will be published in a photo book, which will be presented to primary schools in participating countries. An exhibition of the best paintings will open in in November 2009 o­n the occasion of the International Day against Violence against Women.

Last year, this contest received more than 25,000 paintings from 51 developing countries, including over 3,000 from . Nguyen Ngoc Yen from the southern of An, was o­ne of the two winners in . The other was a Thai pupil.