Children should be protected from violence and sexual abuse

10/01/2020
While efforts are being made to prevent violence against children, much more work still needs to be done. 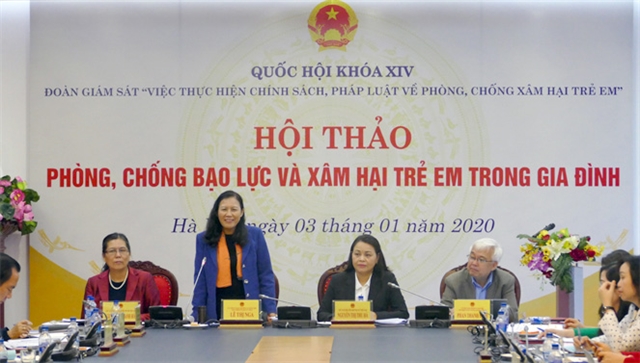 That was the message delivered at a workshop held on Friday by Việt Nam Women’s Union and the supervisory team of the National Assembly (NA) on prevention and combating child abuse and domestic violence.

Nguyễn Thị Thu Hà, President of Việt Nam Women’s Union said although Việt Nam had a relatively complete legal system and child protection policies in place, they were still not effective enough to put an end to the problem.

Statistics from the Criminal Police Department under the Ministry of Public Security showed 2,643 cases of sexual violence against children were reported in 2017-2018. But it was only the tip of the iceberg as a lot of cases have not yet been detected or the victims and their families failed to report the cases to the authorities.

The supervisory reports of the NA at 17 provinces and cities nationwide revealed most of sexual abuse and violence were made by relatives or acquaintances of victims.

Nguyễn Thị Thanh Hòa, Chairwoman of Việt Nam Association Protection of Child’ Right, said adults in the family often got angry and considered it as a reason for committing acts of violence against their children.

The number of calls to the national child protection hotline for children also increased continuously over the past years. It received 353 calls in the first six months of last year.

Participants at the conference attributed the rise to lack of parental care and lack of gender education and life skills at schools. The degradation in virtue and lifestyle of some members of the family was also a problem.

The dissemination on violence and abuse against children was not effective, they said.

The participants suggested the NA strengthen supervision on the implementation of 2016 Law on Children to provide better protection for them.

Attention should be paid to children with divorced parents and review the punishments to those who detected child abuse cases but did not denounce.

Hòa emphasised the role of family members in the protection of children against violence and abuse.

“To teach children, parents must learn by themselves by participating in parenting classes,” she said.

Children should be educated about sex from their childhood, she said.

Parents should also equip their children with self-defence skills when encountering potential abusers, Hòa said, adding that they should spend time talking with their children to create a bond between parents and their children.

Lê Thị Nga, chairwoman of NA’s Judicial Committee said it was necessary to assess the level of domestic violence and abuse against children to devise appropriate measures to protect them from violence and sexual abuse in the future.