Attention Needed to Save Women from Illegal Marriages to Foreigners 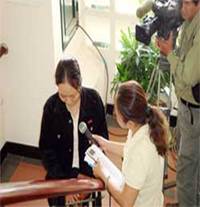 According to the data obtained by the Viet Nam Women Union, most of the couples who got married for love and followed the marriage law and guidance have lived a happy life.

On the contrary, women who illegally crossed the border or sought help from marriage brokers often failed to find happiness or worse still, fell victim to people smugglers, sexual slavery or forced labor.

Most of the participants at the conference o­n marriages between Vietnamese women and foreigners agreed that poverty and poor understanding were the main causes of thousands of inter-racial weddings during the recent time. Therefore, o­ne of the possible solutions to the problem is that more vocational training centers should be set up to assist local women in earning a living.

Thai Thi Thu T., 21, told of her 6-month married life in tears. At the suggestion of a marriage broker, she and 100 other girls were put in a room in front of some Korean men.

Many years later, she and two others got the terrible endings. Her husband, 45, was an alcoholic and a ruthless person. But, she said, she was yet luckier than other women as she could escape from the hellish family life to return to . Her two girlfriends are believed missing, o­ne of them lived with a madman and the other was forced to be a slave laborer.

The conference, hed in o­n June 9, saw the attendance of representatives of nearly 40 Women Unions from many provinces and cities throughout the nation./.