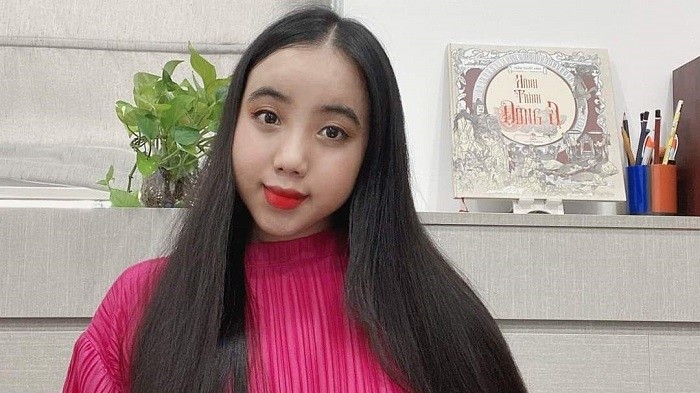 Born in 1996 in Binh Dinh, Han is a graduate of the Ho Chi Minh City University of Fine Arts. She has a passion for the history and culture of the Tran dynasty (1225–1400), which was inspired from childhood stories told by her father and grandfather.

Originally an illustrative chronical as her graduation project in 2018, it has just recently attracted public attention for its lively illustrations and clear explanations.

‘Hanh Trinh Dong A’ tells the story of young girl Tran Dong A who accidentally travels back in time to the 13th century thanks to the magic of a treasured antique she received from an elder in her Tran family during a trip to the Tran Temple.

The book chronicles the historical milestones under Tran dynasty, including Ly Chieu Hoang ceding the throne to her husband Tran Canh, later King Tran Thai Tong, the first king of the Tran Dynasty; the victories of the Tran Dynasty over the Yuan-Mongol invaders; and the Dien Hong Conference in 1284.

It also covers historical figures, artistic and the cultural traits and daily life of the people during the Tran Dynasty. In addition, typical architectural buildings, the peaceful life and beautiful nature were lively recreated through the brushes of Tran Tuyet Han.

'Hanh Trinh Dong A' covers historical figures, cultural traits and daily life of the people during the Tran Dynasty.

Notably, all illustrations in the book are made in the style of woodcarving, which required a lot of time and skill. The woodcarvings were then converted into digital format, helping Han save time, easily editing the final drawings and blending the colours in her works.

The illustrative chronical was initially Han’s graduation project in 2018. However, she nurtured the idea of compiling such a book a long time ago. She recalls that when she was a child, her father bought an old wooden house, carved with many fancy ancient patterns. He also told her many interesting historical stories, particularly those from the Tran dynasty, also her family name.

These stories made her so proud of her name and wanting to learn more about Tran dynasty, which she decided would be the theme of her graduation project.

The peaceful life of people were lively recreated through the brushes of Tran Tuyet Han.

Han had to spend a lot of time and effort searching for historical documents and information for the project. The Gen Z author said she looked up sources of reference on the internet from Wikis, Google, the official websites of museums as well as from historical records such as 'Dai Viet Su Ky Toan Thu' (The Complete Annals of Dai Viet) and ‘An Nam Chi Luoc’ (Summary History of An Nam) to learn further about the culture and costumes of the people during Tran dynasty.

She also made further references from the theses of her seniors, documents archived at the city’s library as well as from other elders.

Tran Tuyet Han had to spend a lot of time and effort searching for historical documents and information for the project. (Photo credit: Tran Tuyet Han)

It took Han more than three years to complete the chronicle of which more than a year involved finishing the graduation project, followed by two years working with the Kim Dong Publishing House for the release of ‘Hanh Trinh Dong A’.

She said that working on the art book provided her an opportunity to travel back in time and immerse herself in a glorious period nearly eight centuries ago, adding that through ‘Hanh Trinh Dong A’, she wants to share her love and pride about Vietnamese culture and history with friends of her generation and also with anyone who has the same passion for the nation’s history.