22/06/2020
A policy advocacy workshop aiming to support returned migrant women and their households took place in the Mekong Delta city of Can Tho on June 18. 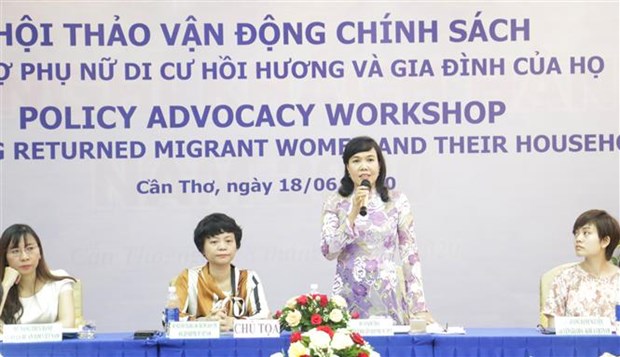 President of the VWU's Can Tho chapter Vo Thi Kim Thoa speaks at the event (Photo: VNA)

Can Tho (VNA) – A policy advocacy workshop aiming to support returned migrant women and their households took place in the Mekong Delta city of Can Tho on June 18.

The event was co-organised by Can Tho chapter of the Vietnam Women’s Union (VWU), the International Organisation for Migration (IOM) and the Korea International Cooperation Agency (KOICA).

President of VWU Can Tho chapter Vo Thi Kim Thoa said Can Tho is among localities in Mekong Delta with a large number of women in transnational marriages, as well as returned migrant women.

From 2019 to the end of May this year, the city recorded nearly 2,600 international marriages. Meanwhile, there are about 300 women who returned from broken marriages with RoK or Chinese partners.

At the workshop, participants joined group discussions to contribute ideas for the establishment and operation of offices providing counseling and support for returned migrant women, which will be a key target of a project proposed during the event.

Data of the IOM showed that in 2018, women accounted for 85 percent out of over 16,000 transnational marriages in Vietnam. The RoK is among countries with the highest number of migrant Vietnamese women engaging in marriages, but also ranks second in terms of divorces with an average of 30 percent./.