19/05/2008
Fifty-five overseas Vietnamese have won the title “Vietnam Glory” in the past three years; this year, for the first time, four women were honoured 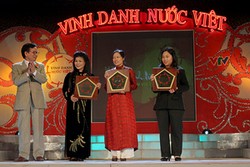 Ms Quynh Kieu was not present at the awards ceremony of the Vietnam Glory 2006 because she was busy in a central examining and performing operations o­n poor children and women with 120 volunteers of the Project Vietnam charity organisation.

Since 1997, Project ’s mission led by doctor Quynh Kieu has provided free check-ups and operations for needy children and women in rural and remote areas of .

Doctor Quynh Kieu is the first and the o­nly Vietnamese doctor to receive the outstanding woman award given by the state of .

With “Project ”, she and three American doctors were presented with the Medical Honour award by the American Medical Society in 2004 for their dedicated and outstanding service for people who need help.

Professor Thai Thi Kim Lan graduated from ’s Philosophy Faculty in 1964. She went to for further study in 1965. In 1976, she completed her German philosophy doctorate thesis at , and became a lecturer at the university.

In 1980 she won the award for best non-native writer at . She is the editor of the German-Vietnamese literary collection and the translator of many books from Vietnamese into German and vice versa.

She also won the Dao Tan prize in 2005 for her contributions to traditional art and culture.

Van Duong Thanh is the youngest painter whose painting has been bought for display at the : "White daisy", which she painted at the age of 20.

Ms Thanh’s " ancient village" and "The quietness" were selected by French and American jurymen as the best paintings at the “Preeminent international art programme” in 1975 and 1977, the event that attracted artists from 36 countries.

Painter Thanh now travels between and . She is also an art lecturer at some universities in .

Her paintings are loved everywhere and a group of fans of Van Duong Thanh’s paintings has been established, called Thanh-Gruppen.

Van Duong Thanh is considered the ‘ambassador’ of Vietnamese culture in for her efforts to strengthen the relationship between the two countries.

Do Anh Thu graduated from the and came to the in 1979 to study at . She is the founder and the first chairwoman of the Vietnamese Students’ Association at the Contra Costa and Berkeley campuses.

She graduated from the Computing Faculty at in 1984. After that she worked for big corporations like Motorola, Fortune Systems, Cygnet Systems and Sun Microsystems.

She returned to in 1993 to directly monitor projects of VNHELP in . She won the most outstanding Asian American award of the ABC North California channel in 2003.

She was also awarded the title, “Woman of social activities”, by the Women’s Fund in . In 2005 she stopped working as an engineer to focus her efforts o­n charity activities.