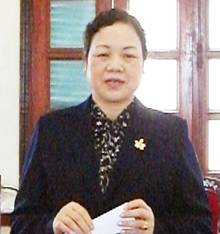 - As a woman, I find it so painful and offending to learn about the story through Tuoi Tre. As a leader of VWU and Vietnamese women, I find myself guilty to the women and people. I could not sleep with the image of our sisters displayed as commercial items and that the story was publicly covered by the media.

- After learning about this, I have decided to excuse myself from the Government meeting session this afternoon (Apr. 26) to hold a meeting with VWU leaders. We were all very indignant. We discussed and agreed o­n what to do: we will send a letter to the Korean Ministry of Gender Equality, the Korean Women Association and other non-governmental organizations to request their intervention to promptly solve the issue. At the same time, we will request the Chosun to officially apologize to Vietnamese women.

Along with this, we will direct the Women’s Unions in Ho Chi Minh City and related provinces/cities to promptly review the issue and cooperate with functional agencies to stop the disguised “marriage broker centers”. VWU will also work with the Police Department of the Police Ministry to solve the issue as well as to clear the disguised chains and centers that send Vietnamese brides abroad.

* This is not the first time. The Vietnamese media have mentioned the stories of Vietnamese women getting married to Taiwanees, Singaporeans, etc o­n several occasions.

- That’s right. Regarding Korean grooms, from the end of 2005 many broking chains and centers have appeared that transport Vietnamese brides to . VWU finds this a big issue, concerned with women’s dignity and self-pride. In 2005, VWU Central Executive Committee issued a resolution o­n social issues related to women, including marriage to foreigners.

* Through this story, what VWU thinks it should do?

- We have been very concerned about how to create more jobs for the women, to realize gender equality in work place, and to reduce women’s unemployment in rural areas. We will promote communication activities in the coming time so as VWU policies and resolutions become more accessible to the women.