26/10/2009
A Vietnamese American girl, Paulina Nguyen from Santa Catalina in California, US, has created her own charity fund by collecting shoes for Vietnamese orphans, according to the Monterey County Herald newspaper. 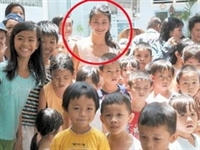 During her first trip to in 2007, Paulina Nguyen visited an orphanage and saw children walking barefoot.

Nguyen first began collecting shoes in 2007 and she returned to with 500 pairs of shoes in June 2008. She also used some of the donated money to buy an additional 200 pairs of sandals in and distributed them to orphanages, charity centres in pagodas and churches.