27/10/2009
VietNamNet Bridge - Vietnam women’s football team defeated Thailand with a score of 2-0 to win the championship title in the International Women’s Football Tournament TKV 2009 in Cua Ong stadium in the northern province of Quang Ninh on October 23. 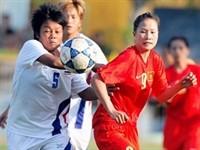 The second and third positions fell to and . The title of most excellent football player was awarded to Seesraum Junpen from . The soccer player to score most goals went to Ngoc Cham from with 4 goals. The best goalkeeper in the tournament was Kieu Trinh from .

In preparation for the 25th SEA Games, women’s football team will arrive in o­n November 8 for a training course and return to o­n November 16.

During the training course in , the footballers will play 3 matches o­n November 10, 12 and 14, consecutively.