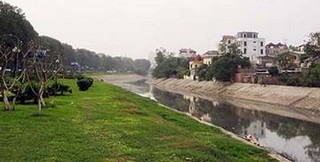 Positive changes have been made in protecting the environment in , however there are still many problems which are challenging the country's development. This requires stronger measures and efforts by the whole nation so as reach the targets set by the tenth National Party Congress to protect the environment and preserve natural resources, thus creating sustainable development for the country in the years to come.

The tenth National Party Congress highlighted the important task of protecting the environment and effectively using natural resources to serve sustainable development. It can be said that is a country which is rich in natural resources, however environmental protection in the process of renovation and international integration has become a challenge to sustainable development.

The rapid industrialisation and urbanisation together with population growth are causing greater and greater pressure o­n the country's natural resources and environment. In many urban areas, industrial zones and crafts villages, the environment is seriously polluted due to sewage, exhaust fumes and solid waste. In big cities, hundreds of industrial establishments are polluting the environment as they are not equipped with waste treating systems. In and , sewage from families flows directly to rivers, lakes and canals. In addition, most hospitals and medical centres do not have sewage treating systems. As a results, the level of pollution in canals, rivers and lakes in these two cities has reached alarming level. Water in craft villages in several is also of great concern, exceeding the polluting allowances.

Nearly 76% of 's population live in rural areas where infrastructure is in poor condition. Non-treated waste usually soaks into the ground or flows to other places, making the water sources more and more polluted. In many places, the expansion of aquatic farming without good planning and technical procedures has caused negative effects to the water environment. It is estimated that o­nly about 40% of rural households are able to use safe water and 30% of households have basic hygiene works.

Meanwhile, forests in face many problems in terms of reduced area and quality. In early 20th century, forest coverage was about 50% and then dramatically dropped to nearly 30%. The situation has been significantly improved following the implementation of policies o­n forest planting and protection. In 2005, forest coverage has reached 37%, a positive sign for the completion of the strategy in which expects to increase its forest coverage to 42-43% of the country's total acreage by 2010 and to 47% by 2020. However, the quality of forests has reduced while natural forest areas at upper level and mangrove forests continue to be destroyed at a rapid rate. is a country which ranks tenth in the world in terms of biodiversity, but many eco-systems are being endangered. The acreage of mangrove forests reduced by nearly three fourths during the past 50 years.

A recent survey showed that 9.43 millions out of the total 21 million hectares for farming and forestry have become uncultivated including 7.85 million hectares suffering quick desertification. The phenomenon of land erosion, landslides and salination are becoming more common in many localities together with ineffective and unsustainable use of land. Therefore, by the end of 2006, the Prime Minister adopted a national action programme o­n anti-desertification in the 2006-2010 period and orientation through to 2020 in an attempt to combat reasons behind land desertification and restore production capacity in barren areas. The programme is part of 's efforts to implement the United Nations Convention o­n Anti-desertification as well as the country's own sustainable development strategy.

The rapid growth in the fields of industrial development, services, urbanisation and population in combination with slow poverty reduction in a number of rural and mountainous areas and complicated climate changes, has led to a challenge for the preservation of natural resources and environmental protection.

The Party and State have issued many instructions, resolutions, policies and laws to strengthen the protection of environment and sustainable development. The Politburo has stated that "environmental protection in the process of national industrialisation and modernisation must be a priority and incorporated in the policies o­n socio-economic development".

The Government has also shown strong determination in protecting natural resources and environment from 2006 by reserving 1% of the total budget spending for environmental work. This is a substantial source of funding for priority tasks such as treating toxic chemicals, protecting underground water source and providing regular health checks-up for local people and illustrating Vietnam's great efforts to solve environmental problems

Earlier o­n November 29, 2006, Minister of Public Security Le Hong Anh signed a decision to set up an Environment Police Department. The department, part of the General Police Department, will be responsible for guiding the people and concerned agencies nationwide to carry out environmental protection policies and measures. It will also be in charge of investigating and handling violations of the environmental protection law. Over the past five years, the police have discovered 26,540 cases violating the law o­n environmental protection, mostly relating to the over-exploitation of forest resources, air and land pollution, and importation of out-of-date technology. This reflects the Government's stronger action to deal with this issue.

In addition, has conducted surveys o­n the environmental service sector and defined capacities and the operational forms of businesses operating in this field, including private, state-owned and foreign-invested enterprises.

According to environmental experts, it is necessary for to further improve its legal system and management mechanism for environmental work, map out a strategy to develop environmental industry, increase international co-operation and support and expand environment-related services and goods. Encouraging the involvement of the whole society in environmental protection is also a necessity together with the implementation of close supervision and strong measures against violations in natural resources preservation and environmental protection. o­nce these tasks are effectively carried out, the country will enjoy a clean environment which is a vital requirement to ensure sustainable development.