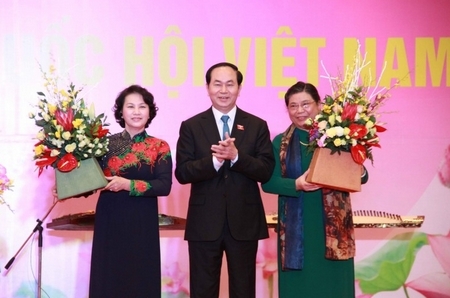 Giving a speech at the ceremony, NA Chairwoman Nguyen Thi Kim Ngan affirmed: Inheriting and developing the activities experience of the group for the last 2 terms, the 14th tenure Female NA Deputy Group would continue to hold practical fora for female deputies to exchange and skills, helping them to work more effectively as people’s representatives as well as to enhance the quality, effectiveness and efficiency of the NA activities o­n legislation, supervision and decisions makingon important issues of the country. Thus, the position and role of female deputies o­n policy making, protection of women and children’s rights, implementation of gender equality objective are increased,in order to deserve as the people’s representatives and the electorate trust.

Sending a congratulation message to female leaders and NA deputies, Prime Minister Nguyen Xuan Phuc highly appreciated great contributions of women in general and female deputies in particular over the last years. He also expressed a strong belief that the Group would effectively uphold traditions and works as the people’s representatives to deserve the confidence and trust of the Party, State and all Vietnamese people.

Prime Minister Nguyen Xuan Phuc also requested the NA would closely collaborate with the Government to undertake and fulfill missions and targets for gender equality and women’s advancement.

The 14th tenure Female NA Deputy Group officially presented with 132 members. Ms. Tong Thi Phong, Politburo member, Deputy Chairwoman of the National Assembly, was elected to be the Head of the Group.