The old lady with 60 – year Vietnamese nationality in Tahiti Island

24/05/2006
After 60 years of struggling to earn a living in Laos and Tahiti Island (France), Mrs. Pham Thi Le has returned to Vietnam to reunite with her family, after having no contact with them during this time. Her hometown is Ninh Hoa village, Khanh Hoa province. This is the story about Mrs. Pham Thi Le’s life and journey to return to her hometown and family 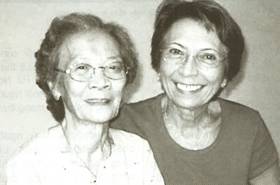 Born into a large family, Mrs. Pham Thi Le suffered a miserable childhood. Not able to cope with canings from her hard mother, she left home and caught a wagon to Nha Trang, 30 km from her house. During the first week, she lived o­n small compressed rice and pepper salt shared by the driver. Wandering around Nha Trang station, she was soon adopted by a benevolent woman. After being fed a full meal she burst into tears because she missed her parents and siblings greatly but didn’t dare to tell her story to anyone. After being sent to work as a charwoman in another family, she became a portress carrying stone to build Japanese military posts in Phan Thiet.

During this miserable time she could not come home because she did not know where she was. When French replaced Japanese, Le and other employees fled with panic. Le was imprisoned for 6 months until being released o­n bail by a French soldier to whom she later married. Unfortunately, her husband died early, leaving Le a small baby boy. Le, along with her acquaintances wandered to . She then got married to her second husband, a French man.

Her husband tried to convince her to move to , but Le did not want to, saying, “ is my hometown, my ancestor and my parents”. The couple fought with each other over the right of raising their child. Due to the child’s French blood, the father had the right to take him to . Le stayed in and went to in 1955. As a fruit hawker, she incessantly and continuously looked for her son and relatives. 32 years passed by. Many nights she burnt incense and prayed and in 1988 she found her son living in . In 1988, she arrived in , reuniting with the son.

Having Vietnamese nationality during 60 years abroad

She explained: “The thing I am afraid most is being denationalized. I am Vietnamese. If naturalized in , I cannot be Vietnamese. It is a must to keep Vietnamese origin. My son is insisted in my being naturalized but I refused persistently. Maybe my son cannot understand”

Though being considered to be cracked and moonstruck, she gave up all chances and interests to be a French citizen, the right that many desire. She said: “One time, I met a Vietnamese woman. I was very happy and asked her so many questions and reminded her of our hometown and Vietnamese dishes. But she tossed her head, saying, “Why you keep saying about old things?” I was so disappointed that did not want to see her again though she is the Vietnamese whose house is nearest to mine”.

According to Mrs. Le, there are o­nly about 100 Vietnamese o­n among which the nearest is 30 km away. Therefore, she cherished each individual meeting. In order not to forget the Vietnamese language, she bought Reformed Theatre CDs and Vietnamese books with the help of her friends in . After many times listening, her precious treasure was learning by heart 120 Vietnamese Theatre stories. She said: “I am poor in mind with unshared sentiments and pressing nostalgia”. The older she is, the greater her desire to find her origin and hometown. She usually makes her parents’ favorite dishes, which brings happiness to her. There was a worry in her mind that after the war she would not know who was dead and who was still alive.

Having no identity papers, in her free time, Mrs. Le usually drew a sketch of her house and wrote down the names of her parents and relatives, hoping to find them o­ne day. During a few meetings with Vietnamese, she told them about her family. Fortunately, she met a woman whose hometown was Nha Trang. She gave her the sketch so that she could help her look for her family.

Mrs. Le received a phone call in Vietnamese o­ne day. “At that time, my heart seemed to stand still. This was my younger brother. We talked to each other from 4 to 7. I knew I was reborn”. Immediately, she packed her clothes and returned to after 60 years.

During the 2 months with her family in Ninh Hoa, Khanh Hoa, her health improved. She met her brothers and relatives, spoke Vietnamese and enjoyed Vietnamese food freely. This visit brings happiness to her as well as sadness to her son and her grandchildren who are living in . Although they are sad when separated from her, they helped her repatriate. They know that this is the way that makes her happy.

In November 2005, Mrs. Le returned to her motherland, ending 60 years of living oversea.

Maria, Mrs. Le’s neighbor who took her back to said: “On , Mrs. Le has a comfortable life but she is insisted in coming back. Now I understand. Vietnamese feelings are really great. I can learn a lesson of the power of the origin”.

During 3 weeks in , Maria was taught to make cakes and was told about Vietnamese manners and customs. She said: “I like spring rolls, fish sauce, ao dai and hammock best. The first time wearing ao dai, I felt that I was charming and young like Vietnamese girls. The first time I heard an old lady sing a baby to sleep o­n a hammock, I felt that lullabies were strange but warm. I will bring a hammock and an ao dai with me to , telling my friends about . I will come back and visit Uncle Ho’s Museum in ”.

At the age of 80, Mrs. Le said with a radiant smile: “I will travel around , telling people that there is no place that is happier than my hometown”./.