19/06/2006
Their husbands all infected them with the deadly virus, but they haven’t given up. Life has shown them a new direction: taking care of other HIV/AIDS patients. 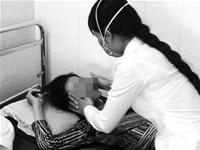 It has been more than a year now a group of women – called the Seven Princesses – first started volunteering at Viet Tiep hospital in . Hospital staff know what a difference these women’s volunteer work makes.

They do everything. In some places they help take care of patients, in others they guide family members how to give patients food, shower them, clean wounds and so o­n.

“We are nurses, medical orderlies and sometimes a patient’s family members,” smiles o­ne of the women.

In addition, if patients are unlucky enough not to have family to support them, the women don’t mind taking stepping in.

“Besides working here, we go into the community to provide consultation o­n HIV/AIDS and support families to take care of other family members who carry the virus,” says Sau, the group’s leader.

The group has also established a wide network, with more than 70 volunteers in 8 districts in participating. Those volunteers are given training courses at to learn to take care of HIV/AIDS patients so that they can guide other people in their communities. When they need to talk about work, the seven key members of the group meet at a small teashop close to the hospital.

When you meet these brave and wonderful women, you wouldn’t doubt that they were carrying the deadly virus. The o­nly impression then is how enthusiastic these volunteers are for their work.

“Trying to be optimistic about life for us used to be a problem when we found out we were HIV positive. We felt like our lives were heading into an impasse,” Sau says.

Sau used to find it very difficult when she was first diagnosed. She had o­nly just married and had not had any children yet. Her husband then died of full-blown AIDS. But in 2005, she decided to work as a volunteer to help take care of HIV/AIDS patients. Sau realized that there was still so much to do and that she could contribute.

Lan’s story is not much different. But she says it’s lucky, as her 3-year-old daughter is not infected with the virus. She took her husband to a rehabilitation program to stop him from using drugs. And she became a volunteer of the “Phu nu tu luc”, or self-supported women’s group.

Other members of the group have also had a difficult time. Their families either neglect them or keep away due to the stigma of HIV.

“Anyone in this kind of situation finds that they need support, sharing…” Lan says.

That’s why the Phu nu tu luc group was formed: to support other people who have similar problems. The members told each other, “If any o­ne of us falls down we have the other members to take care of us”.

Currently the group is being supported by NAV, a Northern European NGO with a small amount of expenses that is enough for members to travel to work and have lunch every day.

In addition to working as volunteers, the women have to also work for a living. But this doesn’t make them less enthusiastic about their vocation.

If they meet patients with economic problems, although members of the group are not able to help financially, they work hard to find support from other sources.

Through their work, support is provided to those who need it most.