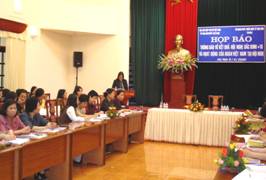 Participants listened to the representatives of the Central Vietnam Women’s Union (VWU) and the National Committee for the Advancement of Women in Vietnam (NCFAW) to present the results of 10 years implementation of Beijing Platform of Action by the Vietnamese Government and NGOs in Vietnam and the participation of the Vietnamese delegation at the BK +10 Conference which took place in New York, America from 28 February to 11th March 2005.

The report emphases that after 10 years implementing the Beijing Platform of Action o­n gender equality, has gained some considerable achievements in this area. Currently, our country ranks the top of the Asian region o­n women representation in the National Assembly (27,31%), the rate of female members in People’s Council at 3 levels of province, district and commune are respectively of 23,8%, 23,22% and 20,1%. For the last 10 years, always has 1 woman as Vice President of the State. Various laws and policies have been improved to ensure the gender equality for women in all aspects of life. However, we are still facing many challenges in the work of gender equality like: the Strategy of Family Planning is not so effectively implemented; the patriaky thinking is still heavy, violence against women is existing....

After the Beijing +10 Conference, VWU is going to develop different activities to promote gender equality such as: formulating the VWU Action Plan to specify Beijing Platform ofAction in the VWU system, formulating and finalizing the Law of Gender Equality to be submitted to the National Assembly, finalizing the Plan of Community Communication o­n the Prevention against Trafficking in Women and Children to 2010 to be submited to the Government for approval, organizing the VWU National Stimulation Congress, Celebrating 20th years of Vietnam Kovalevskaia Prize, awarding Vietnamese Women’s Prize...all are done towards the goal to promote gender equality and invest into women and women’s empowerment which are the unique tools for development.