More women to have access to loans from Agribank

02/12/2016
“Agribank branches will give more loans for women via the VWU’s credit and savings groups with an annual increase of loan outstanding up to 30%” is one content of the inter-sectoral agreement signed between Agribank and VWU. 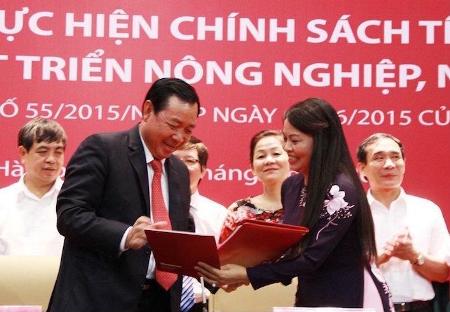 On September 23, the Signing ceremony of the inter-sectoral agreement between Agribank and VWU and Vietnam Farmers'Union was held in Hanoi to implement Decree n# 55/2015/NĐ-CP o­n credit policy for agricultural and rural development.

Agribank and VWU have cooperated effectively over the past years, contributing to the target of raising the loan proportion for agriculture and rural development to 85% with over 9,000 groups and 200,000 women having credit loans from VWU. This financial source has encouraged women to promote production, apply technological and scientific advancements in the model of mutual cooperation and value chain, accelerating the agricultural reconstruction and new rural development. Some provincial and municipal WUs such as Ha Tinh, Thanh Hoa, Bac Giang, Tay Ninh and Binh Thuan have became an important loan transferring channel with the annual outstanding loan increase of over 20%, and low overdue debt rate of 0.02%.

Speaking at the ceremony, VWU President Nguyen Thi Thu Ha stated that in the next term (2017 – 2021), the VWU will focus o­n economic support for women, enhancement of the quality of collective economic models, and encouragement of the new cooperative model with the women’s management; especially the implementation of the PM-approved project “Supporting women’s start-up” with the participation of about 600,000 women. In addition, 18 million female workers and 25% of small and medium-sized enterprises headed by women mainly in agriculture and rural area will be Agribank’s potential customers” – VWU President Nguyen Thi Ha Thu affirmed.

On behalf of VWU leaders, VWU President Nguyen Thi Thu Ha expressed the VWU’s commitments to continuously cooperating with Agribank to implement the Agreement to promote loan quantity and quality.

VWU President also expected that Agribank would help address some of women’s specific problems such as loan procedure for none-householder women, household groups, agriculture production or value chain groups, and business start-up women; and enable the implementation of the Agreement in all 63 provinces and cities throughout the country to ensure women’s access to agriculture and rural credits.

The Agreement between Agribank and VWU would continue to support and facilitate VWU members’ households to access loan and use services in Agribank branches to promote production, business, service and consumption for their better incomes and living standards. Agribank branches will give more loans for women via the VWU’s credit and savings groups with an annual increase of loan outstanding up to 30%.