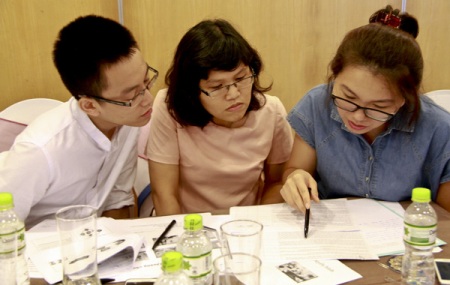 Vietnamese media has been proactive and effective in communication o­n gender equality and girls 'education making great contributions to promote gender equality in Viet Nam. However, there still remains room for development in the elimination of images, content and messages that reinforce gender stereotypes and biases. For this reason, it is imperative to increase the awareness and build the capacity of media content creators and professionals.

The pledges made by media professional result from two training workshops organized by UNESCO in coordination with Radio Voice of Viet Nam (VOV) to raise awareness and build media professional's capacity to disseminate gender-sensitive information. The workshops contribute to the Gender Equality and Girl's Education Initiative in Viet Nam jointly implemented by the Ministry of Education and Training (MOET) and UNESCO.

Through the two two-day training workshops, media professionals from various media organizations including the People's Army Newspaper, Vietnam Women's Newspaper, Young Pioneer, Youth, Education and Time, Voice of Viet Nam Newspaper, Education Review and Radio Voice of Viet Nam, among others, gained knowledge o­n how to mainstream gender equality in communications by identifying and eliminating gender stereotypes, biases, and discrimination. Through the use of UNESCO's Gender-sensitive Indicators for Media participants were able to apply the indicators to examples of published communication materials and put their newly gained knowledge to practice.

Ms. Pham Thu Huong from the Vietnam Women's Newspaper expressed that she has become more gender-sensitive and has developed her skills and ability to mainstream gender equality in her products as a result of the training. Additionally the Mainstreaming Gender in Media Checklists is a great tool to help her plan and produce media content for her newspaper.

Following the training, more than 40 gender-sensitive media products will be produced by participants and disseminated o­n various media platforms to the wider public to promote gender equality and girls and women's education.

UNESCO believes that the media plays an essential role in promoting gender equality and education of girls. The media has the power to amplify messages about gender inequality and the lack of education among girls and women making the public more knowledgeable and aware. A message well communicated and shared with the public can become a message relevant to everyone.