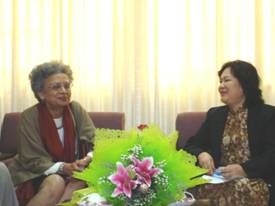 Madame Nguyen Thi Oanh introduced to MadameAnupama Rao Singh about the Vietnam Women’s Union, the Government and Party policies towards the development of women and children such as: gender equality, Family and Marriage Law, Child Care and Protection Law...Madame Oanh presented her satisfaction o­n the good and practical cooperation between Vietnam Women’s Union and UNICEF which was reflected through the Comprehensive early childhood development and Gender and development program to bring loans for more than 60,000 households headed by women and to assist thousands of families from poverty.

Madame Anupama Rao Singh confirmed UNICEF’s high appreciation to the cooperation between and in prevention of trafficking in women crossing border. Besides, UNICEF had great concerns to gender issues and hoped that in the coming time UNICEF continued to collaborate with the Vietnam Women’s Union to develop more programs, plans of action to assist as well as to protect women’s and children’s rights and interests.