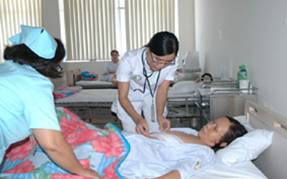 The six-floor hospital, with an investment capital of VND 75 billion, covers an area of 1,000 m2. The ’s Association in Support of Poor and Disadvantaged Women and Children along with many organisations and kind-hearted people raised funds to build the hospital. The hospital is equipped with the most modern devices among hospitals in the Central – Central Highlands provinces. Apart from well-equipped devices, doctors and medical staffs of the hospital are also qualified and committed.

With the aim of giving charity, the hospital provides free medical examination and treatment for poor women who need cure but can not afford to pay hospital fees, said Director of the Da Nang hospital, Phan Gia Anh Bao. Thanks to the hospital, many poor women in are given correct and timely diagnoses and treatment. 54 year-old woman Phan Thi Xay, is among many women suffering from breast cancer. She can not afford to come to for a cancer treatment but at the Da Nang Women’s Hospital she was provided medical examination and treatment. With the help of dedicated doctors, she has gradually recovered.

The hospital lowers hospital fees for more than 70,000 poor women in city with health insurance cards. 1,800 women in extreme difficulty are also provided with free medical examination and treatment. The doctors and staff of the hospital always wish to provide quick and exact diagnoses and treatments for poor patients as well as give them chances to access medical services.