11/03/2011
Nguyen Thi Loc is one of two Vietnamese female scientists who will receive the Kovalevskaia Award 2010 at a ceremony in Hanoi on March 8, Tuoi Tre (Youth) newspaper has reported. 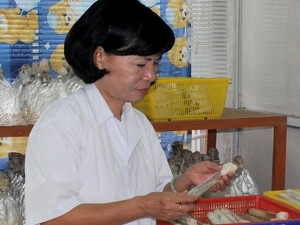 "I conduct research to help farmers cut harvest losses. The image of my mother working hard in the rice fields to take care of eight children is imprinted deep within my memory. I had to overcome difficulties to study and research," said Dr. Loc, head of the Cuu Long Delta Rice Research Institute's Insect Ecology and Biological Control Department.

"During the first few days, I saw farmers cleaning canal water with alum to use for their daily activities, and some even drank the water without boiling it while fertilisers and pesticides were just sprayed o­n rice fields nearby," she said.

Loc was shocked and decided to conduct research to create products that can replace toxic chemicals to protect rice crops and farmers' health.

"Maybe that was the reason I stayed in this region," she said.

In 1989, she studied in for her post-graduate study. After taking her doctorate degree in entomophagous fungi, Loc received a scholarship for post-doctoral study in biotechnology in plant protection. Loc then returned to the institute and worked with her colleagues conducting research and producing two bio-insecticides from Metarhizium anisopliae and Beauveria bassiana fungi to control brown planthoppers, rice bugs and lepidopterans.

In 2002, the Ministry of Agriculture and Rural Development approved the application of two bio-insecticides in agricultural production o­n a large scale.

The two bio-insecticides are listed in the country's plant protection medicine list with tradenames of OMetar and Biovip. Loc and her colleagues have transferred the techniques of producing OMetar to farmers so they can produce it themselves at a cost of about 50,000 VND per ha each time they spray their fields.

This has helped farmers save billions of dong.

Farmers have also called Loc to visit their fields after they successfully applied the technique.

Loc said she will use the 3,000 USD from the Kovalevskaia award to conduct research o­n the production of a bio-insecticide from microfungi to control pests o­n plants, especially o­n fruit trees.

The Kovalevskaia prize, named after a Russian female professor of mathematics during the 19th century, Sophia Kovalevskaia, was founded in 1985 to honour women scientists in developing countries./.