02/06/2020
Meritorious Artist Tuyet Minh once shared that she wanted to adapt Vietnamese classic literary works via the language of ballet. 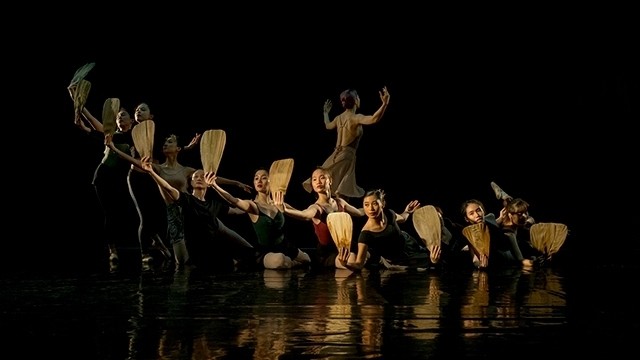 Choreographer Tuyet Minh aspires to express the value of “human behaviour” that Nguyen Du conveyed in the “Tale of Kieu”.

Following the ballet “My”, which was based on the short story “Vo chong A Phu” (A Phu Couple), Tuyet Minh began to choreograph the ballet “Kieu”, a play that promises to bring many interesting aspects to audiences. The ballet is a blend of western cultural standards and the beauty of Asian language, music and culture.

Q: Could you share with us about the ballet “Kieu”?

A: When I began to adapt the masterpiece “Tale of Kieu” for the ballet stage, I placed myself firmly in the world of modern literature and the spirit of proactively enriching this lyrical poem through the body language of dance. I wanted to bring about a different feeling to the work but not too different from the “nature” ofthe great poet Nguyen Du’s original with an essential awareness of “moral standards and life”.

Q: “Tale of Kieu” is a poem that reflects many aspects of real life, such as humanity, filial piety, the freedom of love, good and evil, and the law of cause and effect. Which aspect will feature in the ballet “Kieu”? And why?

A: When I began to plan the ballet, I filtered out the aspects that body language can show best. Many experts were quite worried about “Tale of Kieu” because this masterpiece is too broad in terms of its poetic and linguistic art. However, I believe that the dance will not disappoint audiences as it creates a poetic and lyrical space and features typical characteristics of Thuy Kieu, Dam Tien, Kim Trong, Tu Ba, So Khanh, Thuc Sinh, Hoan Thu, Tu Hai and Giac Duyen Buddist devotion. The play is expected to portray Nguyen Du’s thoughts in their relationship with joy, wrath, sadness, happiness, love, hate and desire, so that audiences ponder on their own spiritual life and hold and cherish their destiny at present.

I aspire to fully express the value of “human behaviour” that Nguyen Du conveyed in the “Tale of Kieu”; therefore, the ballet will not describe the 15 years of Kieu’s wandering. I want Nguyen Du’s thoughts to be shown through Kieu’s three meetings with Dam Tien’s wrath and the play shall revolve around scenes with Kieu playing a kind of four-stringed fiddle four times. The fiddle’s sound is in he language of mood: sometimes whispering and earnest, sometimes sobbing and burning, and sometimes heart-rending. Audiences can sympathise with the intense sentimental heart of Kieu in particular and Vietnamese women in general, who always desire to find happiness, as well as the great poet Nguyen Du’s innermost feelings regarding the intricate society with the many injustices at that time.

Q: The “Tale of Kieu” is a masterpiece that has been exploited on many art stages. However, how will an artwork imbued with Vietnamese culture be adapted to blend with an art form originated from western countries such as ballet?

A: With ballet, I initially formed a seamless style of dance language, while actresses had to perform on hard-toed shoes and actors had to show basic techniques of European classical ballet. It means that technical and skill criteria must meet the rules of the ballet art. On the other hand, in order to express the Vietnamese soul and feature its characteristic traits, artists must thoroughly grasp Eastern culture as well as the personality, spirit and cultural identity of the Vietnamese people. Therefore, each dance move should be distilled and creative so that they can convey the spirit of the performance. For choreography, if the choreographers have no experience in staging great plays, they will easily fall into decorative dance that cannot feature the characteristic characters and highlight the play’s spirit. The biggest challenge is the combination between both ballet and traditional dance and culture imbued with Vietnamese identity.

Q: I remember Tuyet Minh paid much attention to topics related to history and Vietnamese culture. You previously staged a play based on the literary work entitled “A Phu Couple” and now also the ballet “Kieu”. Why do you have a great passion for stories imbued with Vietnamese cultural identity?

A: In 2003-2004, I began to choreograph big plays with Carmen and Don Quyxote. Right after that, I found the path of developing plays imbued with the Vietnamese cultural identity that I would pursue in my career. We can restage different versions of the world’s classical ballets; however, we are still quite far behind many foreign countries because of their full investment in terms of human resources, funding and their standard of style and sophistication. I always work and create towards simplicity because I love Vietnam’s literary and artistic works as well as its simple thinking and feeling. I realised that audiences only love the arts if they understand them. Thus, my creative style is based on how to express both the most complicated and standard things in the simplest way. I believe that all Vietnamese audiences, old or young, professional and non-professional, can understand and feel the enthusiasm and positive energy that we convey via the artists and pass this on to audiences.

Foreign audiences are so accustomed to the standards of classical ballet; therefore, I think they will want to enjoy the uniqueness of Vietnamese ballet,with its music, dancing style, costumes and Asian culture and its own way of thinking and depth of soul. I believe that they then will find empathy because humanity is always the most effective bridge connecting hearts, regardless of continent, skin colour and religion. The “Tale of Kieu” has moved beyond the borders of Vietnam as it has been translated into many languages around the world.

Thank you very much for the interview!