An individual help to Vietnamese students in France

17/09/2009
Le Ngoc Huong, otherwise known as “Aunt Bay”, says she will continue to support overseas Vietnamese students as long as she can. 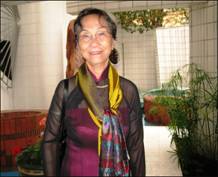 At this time of year, many students have started a new life far from their families in a strange country, yet they are not alone and helpless.

in western currently has over 100 Vietnamese studying in the city. Coming from different regions of and majoring in different fields, they all found it difficult in the early days to settle down in a new environment.

Quang Hai, an architectural student at , was well aware of the difficulties faced by overseas students. Upon arriving in he became sick and, without ’s help, he would have dropped out of the university.

“Every morning took me to hospital in her car for health tests. She also asked a doctor, a former student of hers, to help,” Hai says.

Quang Hai finally overcame all his difficulties with the help of . He visits whenever he can as he regards her as the closest person he’s got to family.

Few of the Vietnamese students in know ’s real name, but they have great respect for this former Vice Professor at , who is now in her 70’s and is still ready to help them.

’s Vietnamese-style house, complete with an ancestral alter, has long been a meeting place for Vietnamese students in , where they feel quite comfortable like at home.

participates in most of Vietnamese students’ activities in , not just as a guest, but as a sponsor.

Nguyen Phuong Nga, a second-year linguistic research student at , says, “ is our number-one guest whenever we have an important event to mark like International Women’s Day or the traditional Tet holiday.”

“ can’t remember all of the students here but we know her too well,” Nga adds.

When we ask her why she has devoted most of her time to Vietnamese students, smiles and says, “I help them because I love them, because they face so many difficulties, and because we are all Vietnamese”.

She feels confident that every Vietnamese student in will be successful and will end up making a positive contribution to society.

was awarded a certificate of merit by the Ministry of Foreign Affairs o­n September 6 in recognition of her contribution to strengthening educational co-operation between and and her heartfelt assistance to Vietnamese students in .