A touching C-section for pregnant woman with terminal cancer

13/06/2019
Diagnosed with breast cancer at 12 weeks of pregnancy, Nguyen Thi L. (28 years old, from Ly Nhan district, Ha Nam province) was still determined to remain healthy to give birth to her child. The C-section to deliver the baby at week 31 was successful, with the tears of the doctors and L.’s family on May 22. 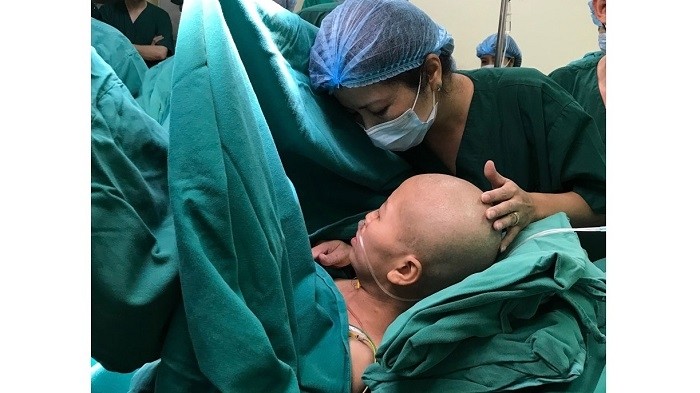 At the 12th week of gestation, the young mother went to K Hospital for examination and was diagnosed with stage 4 breast cancer. Falling in disbelief because of the bad news, she could not believe that the breast tumour discovered at the 8th week of gestation was not a normal milk inflammation in pregnant women.

Standing in front of the decision, either to abort the foetus to treat the cancer or keep the baby, L. decided to give birth to her child.

Doctor Nguyen Tien Duc, Head of the Emergency Department at the Hanoi-based K Hospital, informed that the patient was hospitalised at 22 weeks of pregnancy, with weak health condition, respiratory failure, breathing difficulties and pleural effusion. After L.’s family unanimously agreed to keep the baby, the hospital consulted other medical facilities with specialists from Military Hospital 103 and the National Hospital of Obstetrics and Gynaecology (NHOG) all agreeing to try to keep the baby in the womb as long as they could.

L was admitted to the K Hospital for periodic follow-ups and antenatal care and to the development of the foetus. At week 22, she underwent two chemotherapy treatments. Six weeks after chemotherapy, she showed signs of dyspnoea and the patient was immediately switched to Emergency Department for symptomatic treatment. All medications used were carefully considered by doctors so as not to affect the foetus.

During over two months in hospital, the patient could not breathe but had to sit 24 hours a day, o­nly sleeping for two hours a day, tired and painful due to the cancer spreading to her bones, lungs and other organs.

On May 22, as the foetus was at the 31st week, the doctors at K Hospital realised that the stamina of the mother was limited, dangerous to the life of both mother and child, so they decided to cooperate with the NHOG for a caesarean section o­n L to help her deliver the baby.

The surgery was also extremely rare as doctors had to perform surgery to deliver the baby when the mother was in a sitting position, making it extremely difficult to perform a C-section. As the patient’s health was weakened, the operation was truly a great challenge to the team of 20 doctors.

Associate Professor, Dr. Tran Danh Cuong, from the NHOG, who directly performed the rare C-section, was touched when saying that L. is a resilient mother even though her body was very weak and had to bend to breathe. “The little strength from that mother touched all the medical staff but we had to manipulate very quickly,” Dr. Cuong said.

The moment the baby boy was born was also the moment that the young mother and the surgical team fell into tears. The 1.5 kg baby was then received by emergency physicians in the incubator and transferred to the NHOG for further care. The doctors continued to complete the operation and then another fight in the hope of saving the mother.

Doctor Nguyen Tien Duc shared that, during the surgery, the doctors couldn’t induce anaesthesia because the patient may not have regained consciousness, so o­nly spinal anaesthesia was used. “The operation was very stressful and there was a risk of losing both the mother and the baby. But with the high concentration, the surgical team, consisting of the leading doctors at the two hospitals, successfully helped L. to deliver her baby. Do Binh An was born in the infinite love of his mother and all the doctors,” Duc said.

Accompanying her daughter during the painful period of cancer, Ngan, L's mother could not hide her tears when thinking about her unfortunate daughter and her grandson lying in a glass cage. “Our family is really grateful to the doctors who have dedicated themselves to helping both L. and her son. We don't know what to say, but Binh An's birth is the second revival of my daughter. She will have more energy to see her son, more and longer,” Ngan said in tears.